The new Volvo FH5 is characterized on the outside by the futuristic-looking new LED headlights and a revised grille. These parts have been completely redesigned by WSI, so that the latest Volvo FH series in 1:50 scale is also ready for the future.

FH16
The first FH5 miniatures have now found their way to various customers in the Netherlands. Hardeman Kelderbouw from Lunteren, for example, received an impressive four-axle FH16 rigid in 1:50 scale; equipped open body, three-axle trailer and a truck-mounted crane. The FH16 distinguishes itself from its lighter brother in detail by the characteristic grille with vertical bars.

LNG
WSI made a series of several Volvo FH trucks for Rebro Logistics from Rucphen in Brabant, varying from tractor-trailer to a complete LHV combination. Rebro Transport is a pioneer in the field of alternative fuels. No fewer than 17 LNG trucks operate at the Brabant-based company. For this reason, the LHV model is equipped with an LNG tank.

XXL cabine
Not yet executed as a Volvo FH5, but the Volvo XXL cabin is completely new. WSI has now released this Swedish space miracle for various customers. What about the beautiful cooling combination by Herbert Sas from Dreumel in Gelderland. Commissioned by the Norwegian companies Pedersen Transport and Transport Sevice Strien, two beautiful models of the Volvo XXL were also released, both combined with a four-axle semi low-loader. Of course, the XXL cabin can also be supplied in a Volvo FH5 version.

In addition to the above-mentioned miniatures that have already been delivered to our customers, there are now several expected models of the new Volvo FH5 series. Would you like more information about the new Volvo scale model range? Please contact our sales department. 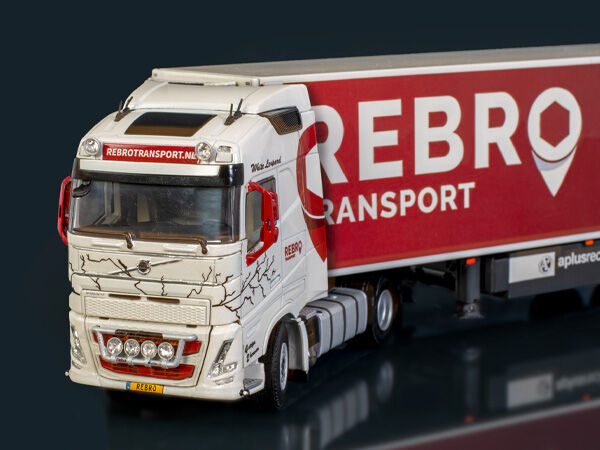